In Osaka, a strange woman walks up to me in a restaurant and tells me I shouldn’t have ordered the raw egg if I didn’t want to eat it. It’s such a waste. (From the picture, I thought it was hard-boiled! I want to protest, but don’t.)

In San Jose, a strange woman walks up to me on the sidewalk and tells me I ought to be wearing a helmet with my roller blades. (My daughter was using it, and I really wanted to come out! I’m really a good person! I want to protest, but don’t.)

Instead, I thank them for their concern. Perhaps they’ve never been anywhere but Osaka or San Jose, I think, somewhat sanctimoniously myself.

In Memphis, however, no one tells me what to do. Here, people hang out on the street, smiling. They cross wherever they want, and at their own pace. They let their dogs wander. In the privacy of their homes, they’ll talk about you plenty, and your mother will probably give you a good talking to. But strangers are friendly and easy going. 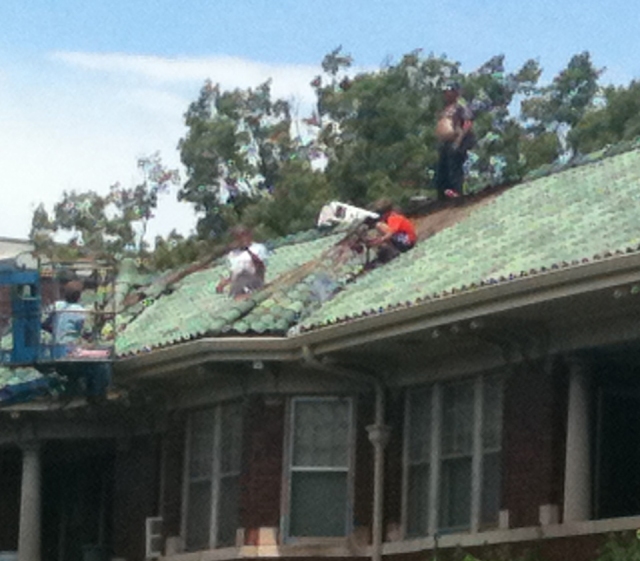 Young boy fixing a tile roof with the men. Not too many signs of safety equipment.

American gal turned Japanese "salaryman" for a while. I'm blogging my experiences as my daughter and I move from Silicon Valley to Japan and beyond.
View all posts by July McAtee →
This entry was posted in Memphis and tagged Culture, Memphis, Musings, Tennessee. Bookmark the permalink.