Last Wednesday, I found my people. Actually, my friend Kelly found them and took me to them. They gather for Osaka Bluegrass Night at Live House: Another Dream (www.an-dream.com, a basement bar near Namba station) on the second Tuesday or Wednesday of every month.

A mandolin player in blue jean overalls, orange T-shirt, big belly, and prickly white beard sat on a box by the door picking a tune. He smiled and nodded at people as they walked in. Banjos, mandolins, basses, guitars, dobros, and fiddles leaned against the walls and across tables. 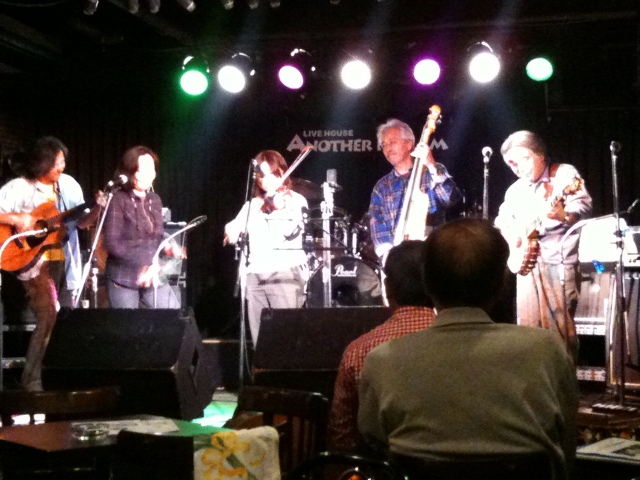 Many performers were husband-and-wife duos and family bands. There were two full-fledged all-men bands. Oh Danny Boy was played. The Southern moon was longed for. Lost lovers were mourned. Spoons were slapped on thighs. CDs sold on a table at the back were promoted self-deprecatingly. People whooped for the banjo breaks–me included. Musicians mixed bands, swapped instruments, walked around mingling with all the tables. Kelly and I were probably the only two people in the whole (modestly sized) audience who didn’t get up and perform at some point.

Chiko, mother-and-wife in a family band called The Mitsuya Clan (in my sadly washed-out picture), took us under her wing. At one point, she got up on stage and insisted that Kelly and I get up and introduce ourselves.

“July is from Memphis, Tennessee,” she said. “She plays the banjo and has been looking for bluegrass in Osaka, and her friend Kelly from China brought her here.” She waved us up on stage, and so we went. Completely caught off guard, I made a bumbling, half-English/half-Japanese self-intro, not quite knowing whether to act Japanese (bowing) or bluegrassy (waving). Kelly, bless her heart, cleaned up after me. After that, people dropped by our table, patting me on my back and telling me to bring my banjo next time. They asked Kelly if she played or sang. “No,” she said. “I’m her personal manager.” (Pointing at me.)

I most enjoyed some of the singing. They sounded straight out of Kentucky, with the wailing tones, the high-lonesome sound, the ballad croon, the four-part gospel harmonies, and a bit of a Japanese accent on top of their Southern drawl. One couple wrote their own lyrics in Japanese.

The gathering was a little quieter than bluegrass events I’ve been to in California, but otherwise seemed exactly the same. Chiko had just returned from a camping/jamming festival somewhere in Japan. Her daughter (in the picture) was getting ready to go to Ireland to hone her fiddling skills. One dobro/mando/guitar player (on guitar in the picture) had recently graduated from the Berkeley School of Music and was himself struggling to find enough bluegrass in Osaka to fulfill his music-playing desires. Yet another mando player, Toshio Watanabe, was nominated for a Grammy this year. Everyone swung by his table at some point to pay him homage. To me, he said, “Oh, well, I’ve just been at it for so long, you know. It’s not that I’m so great.” (Here’s one article I found: http://utbhollywood.com/en/news/monicli/story/2011/2/2.19/index.php)

Many of the people there had been playing bluegrass since the 60s.

American gal turned Japanese "salaryman" for a while. I'm blogging my experiences as my daughter and I move from Silicon Valley to Japan and beyond.
View all posts by July McAtee →
This entry was posted in Osaka and tagged bluegrass, Culture, Japan. Bookmark the permalink.