Gaijin space, if you don’t know, is the space left on the sides of foreigners on the train seats. I’ve experienced it plenty. Often people will stand rather than sit next to me. One time a fellow, even though there was plenty of space between us on the seat, got up and moved to a different seat when one came available. Another time, when a mother pushed her little girl towards an empty space beside me, the girl looked at me with wide, terror-stricken eyes, pulled back, and came close to tears, while her frazzled mother kept pushing her. I got up and moved to a different seat so they could sit down.

My office mates had never heard of gaijin space and tried to come up with explanations.

“It’s probably not really discrimination,” said Gondo-san, an enthusiastic young materials scientist whose desk is littered with wires, small tools, tiny sticky notes, and textbooks on business English and entrepreneurship. “I don’t think it’s that sophisticated, not to that level. It’s more at a subconscious, inarticulate level.”

“I think they’re probably afraid that you’ll speak to them in English,” said Mit-chan (the for-women-only nickname for Miyazawa-san). “They think, what if she talks to me, asks me for directions, how will I respond?”

“Yeah,” said Takeshita-san, an even more enthusiastic young software programmer who eats candy and cakes all day long. “You should wear a sign that says, ‘Japanese OK.'” 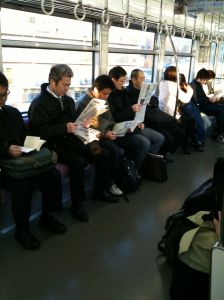 No gaijin space for these folks

I don’t mind the gaijin space. I can spread out and breathe a little. And I understand. I generally don’t really want to sit next to them, either, at the end of a long day.

(No sitting happens in the mornings. I just hope the wheelchair corner has some open wall space, so I can rest my bag on the rail.)

Occasionally, though, I’ll get the opposite. It’s as though they pick me out of the crowd as the perfect train benchmate, and they cozy up right next to me, even when many seats are open. Tonight this happened twice.

This young man sometimes takes the wheelchair spot on my first, emptier train. That's okay. I think he needs it more than I do.

The first time was a young fellow with longish, shaggy, bleached red hair, green knit hat, shiny patent leather purple and black high tops, rolled up jeans, and orange puffy jacket. He was petite, but when he plopped down he took up about three spaces. When someone stood in front of him and tried to sit down, he surprised me by sliding towards me rather than towards the gentleman in black on his other side. He scooted right up next to me until the fur on his hood tickled my cheek. He plunked his white patent leather sports bag onto his lap and pulled out an iPad. He started looking at photos. 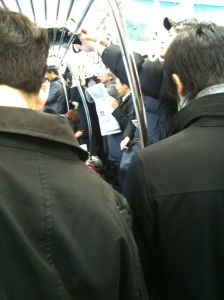 I got lucky this time--wall space!

Still, he seemed a tame enough, squeaky clean young ruffian, and it was rather novel to have someone sit so close. I was sorry to see him go.

He disembarked at Ibaraki station, and a long-legged, cool-as-ice, hot-as-fire middle-aged woman walked on, probably about my age, but with a whole lot more ambiance than I can ever hope to achieve. She wore a knee-length blue linen jacket over a fuzzy red sweater, a multicolored sparkly scarf, tan ankle boots, red knit hat, dark blue-black jeans, and a nonchalant the-world-is-my-cherry attitude. I wondered if she was from a different country, or maybe Tokyo, she walked with such lanky, laid-back grace. No makeup; well-manicured, short nails with no polish. I wanted to be this woman.

She started towards the bench across from me, paused, then turned and with a slight smile and the tiniest bit of eye contact with me, slouched down right next to me and pulled out her iPhone and started reading. I came close to hugging her. I didn’t want to get up when my station came. I wanted to talk to her and find out her story.

But my transfer station was announced, and reluctantly, I got up and left.

There's always plenty of space for everyone on my last train home at night.

I have an overactive imagination, but I thought that maybe for these two people tonight, at a subconscious, inarticulate level, I felt like a safer alternative for a seatmate than the tired, serious businessmen in black trench coats.

American gal turned Japanese "salaryman" for a while. I'm blogging my experiences as my daughter and I move from Silicon Valley to Japan and beyond.
View all posts by July McAtee →
This entry was posted in Osaka and tagged Culture, Japan, Musings, Osaka Monorail, Trains. Bookmark the permalink.