The cafeteria at work served okra again today. I’m Southern, so you’d think I’d be a big fan, but the sliminess makes me gag. (Though a large dose of cajun sauce might change my attitude.)

“You should eat neba neba foods,” says my manager. He’s a bit of a health nut — he runs marathons, plays American football, and takes breakfast bars on trips to eat instead of the hotels’ breakfast buffets. “They are good for your blood.”

“Never never,” I respond in English. He cocks his head to the side and gives his slow smile and a polite chuckle.

I seem to have arrived in Japan during the “neba neba boom (ネバネバブーム).” Neba neba’s most frequent translation is “sticky,” but we are not talking about caramel apples and gummy bears. Nope, everywhere you turn now, you’ll find okra garnished with bonito flakes, slimy yam grated on your soba noodles, wakame seaweed in your salad, taro and Egyptian jute (モロヘイヤ) on your rice, and, of course, natto, natto, natto (gooey fermented soybeans). The food service at work has embraced the fad wholeheartedly, no doubt encouraged by the employee food committee.

The claim is that neba neba foods contain beneficial proteins and acids, the main one being mucin, which eases digestion, prevents colds, and minimizes aging. Other health benefits include lowering cholesterol and strengthening joints and cartilage.

For natto, the claims are more extensive.

“You should eat natto,” my coworker says to me at lunch. “It’s good for women of a certain age, and we should eat a little every day.” I suppose she means it balances women’s hormones?

Natto has also been billed as a diet food. Eating two packs a day can bring about 3.5-kg or more per week losses, one study claims to show. I can well believe it. If I ate a whole pack of natto in the morning, I probably wouldn’t be able to eat anything else all day.

Natto isn’t a native Osaka food; it’s from Tokyo. In the past, my Osaka friends supported my dislike of natto as a kind of regional loyalty. Now, though, the fad has trumped that. But seriously, natto sushi in the convenience stores? Next it’ll be the McNattoBurger on Ronald McD’s menu.

Just for you, dear readers, I bought some natto today on my way home. I stirred it 100 times, as prescribed, to whip the white stringy sliminess into a frenzy. Here it is: 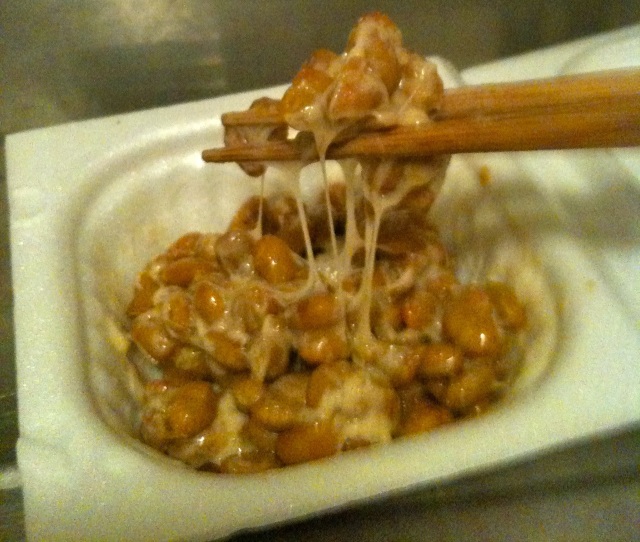 Now that I’ve bought it, I should eat it. It came with packs of soy sauce and mustard to make it more palatable, and to eat it properly, I should beat in a raw egg. A woman my age really should learn how to eat natto. Anyway, otherwise it’ll sit in my refrigerator from now until it’s moldy as well as fermented. I almost tried it when I took the photo, but I just couldn’t. I’ll think about it tomorrow.

American gal turned Japanese "salaryman" for a while. I'm blogging my experiences as my daughter and I move from Silicon Valley to Japan and beyond.
View all posts by July McAtee →
This entry was posted in Osaka and tagged Food Fads, Japan, Musings, Neba Neba. Bookmark the permalink.

12 Responses to The Neba Neba Boom